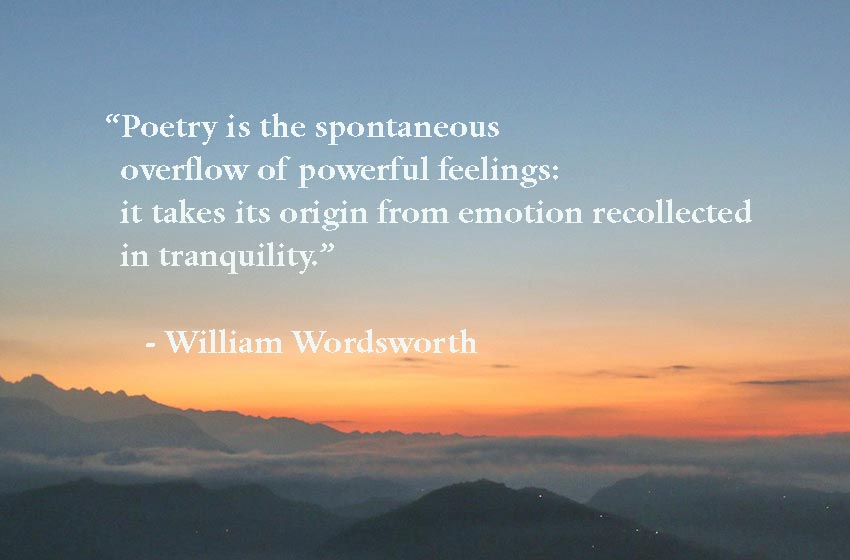 A Slumber Did My Spirit Seal

A slumber did my spirit seal
I had no human fears:
She seemed a thing that could not feel
The touch of earthly years.

No motion has she now, no force;
She neither hears nor sees;
Rolled round in earth’s diurnal course,
With rocks, and stones, and trees.

Earth has not anything to show more fair:
Dull would he be of soul who could pass by
A sight so touching in its majesty:
This City now doth, like a garment, wear
The beauty of the morning; silent, bare,
Ships, towers, domes, theatres, and temples lie
Open unto the fields, and to the sky;
All bright and glittering in the smokeless air.
Never did sun more beautifully steep
In his first splendour, valley, rock, or hill;
Ne’er saw I, never felt, a calm so deep!
The river glideth at his own sweet will:
Dear God! the very houses seem asleep;
And all that mighty heart is lying still!

Surprized by joy — impatient as the wind —
I turn’d to share the transport — O with whom
But Thee — deep buried in the silent tomb,
That spot which no vicissitude can find?

Love, faithful love recall’d thee to my mind
But how could I forget thee? Through what power
Even for the least division of an hour
Have I been so beguiled as to be blind

To my most grievous loss — That thought’s return
Was the worst pang that sorrow ever bore,
Save one, one only, when I stood forlorn,

Knowing my heart’s best treasure was no more;
That neither present time, nor years unborn
Could to my sight that heavenly face restore.

Milton! thou should’st be living at this hour:
England hath need of thee: she is a fen
Of stagnant waters: altar, sword and pen,
Fireside, the heroic wealth of hall and bower,
Have forfeited their ancient English dower
Of inward happiness. We are selfish men;
Oh! raise us up, return to us again;
And give us manners, virtue, freedom, power.
Thy soul was like a Star, and dwelt apart:
Thou hadst a voice whose sound was like the sea:
Pure as the naked heavens, majestic, free,
So didst thou travel on life’s common way,
In cheerful godliness; and yet thy heart
The lowliest duties on herself did lay.

There is a change–and I am poor;
Your love hath been, nor long ago,
A fountain at my fond heart’s door,
Whose only business was to flow;
And flow it did; not taking heed
Of its own bounty, or my need.

What happy moments did I count!
Blest was I then all bliss above!
Now, for that consecrated fount
Of murmuring, sparkling, living love,
What have I? Shall I dare to tell?
A comfortless and hidden well.

A well of love–it may be deep–
I trust it is,–and never dry:
What matter? If the waters sleep
In silence and obscurity.
–Such change, and at the very door
Of my fond heart, hath made me poor.

The world is too much with us

The world is too much with us; late and soon,
Getting and spending, we lay waste our powers;—
Little we see in Nature that is ours;
We have given our hearts away, a sordid boon!
This Sea that bares her bosom to the moon;
The winds that will be howling at all hours,
And are up-gathered now like sleeping flowers;
For this, for everything, we are out of tune;
It moves us not. Great God! I’d rather be
A Pagan suckled in a creed outworn;
So might I, standing on this pleasant lea,
Have glimpses that would make me less forlorn;
Have sight of Proteus rising from the sea;
Or hear old Triton blow his wreathèd horn.

She dwelt among the untrodden ways
Beside the springs of Dove,
Maid whom there were none to praise
And very few to love:

A violet by a mossy stone
Half hidden from the eye!
—Fair as a star, when only one
Is shining in the sky.

She lived unknown, and few could know
When Lucy ceased to be;
But she is in her grave, and, oh,
The difference to me!