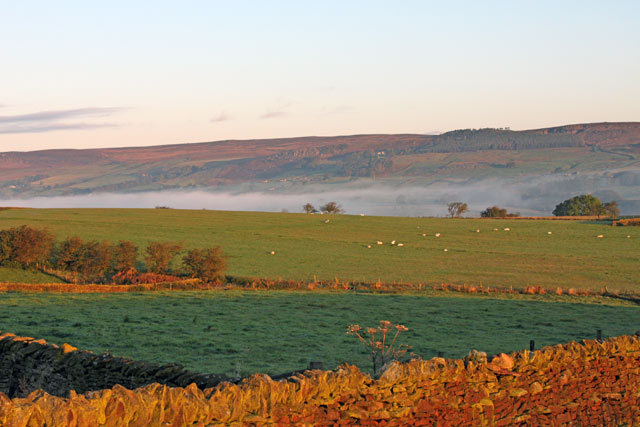 A Quietness distilled
As Twilight long begun,
Or Nature spending with herself
Sequestered Afternoon—

The Dusk drew earlier in—
The Morning foreign shone—
A courteous, yet harrowing Grace,
As Guest, that would be gone—

And thus, without a Wing
Or service of a Keel
Our Summer made her light escape
Into the Beautiful.

With wind and the weather beating round me
Up to the hill and the moorland I go.
Who will come with me? Who will climb with me?
Wade through the brook and tramp through the snow?

Not in the petty circle of cities
Cramped by your doors and your walls I dwell;
Over me God is blue in the welkin,
Against me the wind and the storm rebel.

I sport with solitude here in my regions,
Of misadventure have made me a friend.
Who would live largely? Who would live freely?
Here to the wind-swept uplands ascend.

I am the Lord of tempest and mountain,
I am the Spirit of freedom and pride.
Stark must he be and a kinsman to danger
Who shares my kingdom and walks at my side.

On the Grasshopper and Cricket

The poetry of earth is never dead:
When all the birds are faint with the hot sun,
And hide in cooling trees, a voice will run
From hedge to hedge about the new-mown mead;
That is the Grasshopper’s–he takes the lead
In summer luxury,–he has never done
With his delights; for when tired out with fun
He rests at ease beneath some pleasant weed.
The poetry of earth is ceasing never:
On a lone winter evening, when the frost
Has wrought a silence, from the stove there shrills
The Cricket’s song, in warmth increasing ever,
And seems to one in drowsiness half lost,
The Grasshopper’s among some grassy hills.

I’LL rest me in this sheltered bower,
And look upon the clear blue sky
That smiles upon me through the trees,
Which stand so thick clustering by;

And view their green and glossy leaves,
All glistening in the sunshine fair;
And list the rustling of their boughs,
So softly whispering through the air.

And while my ear drinks in the sound,
My winged soul shall fly away;
Reviewing lone departed years
As one mild, beaming, autumn day;

And soaring on to future scenes,
Like hills and woods, and valleys green,
All basking in the summer’s sun,
But distant still, and dimly seen.

Oh, list! ’tis summer’s very breath
That gently shakes the rustling trees–
But look! the snow is on the ground–
How can I think of scenes like these?

‘Tis but the FROST that clears the air,
And gives the sky that lovely blue;
They’re smiling in a WINTER’S sun,
Those evergreens of sombre hue.

And winter’s chill is on my heart–
How can I dream of future bliss?
How can my spirit soar away,
Confined by such a chain as this

Five years have past; five summers, with the length
Of five long winters! and again I hear
These waters, rolling from their mountain-springs
With a soft inland murmur.—Once again
Do I behold these steep and lofty cliffs,
That on a wild secluded scene impress
Thoughts of more deep seclusion; and connect
The landscape with the quiet of the sky.

a farmer was ploughing
his field
the whole pageantry

of the year was
awake tingling
near

the edge of the sea
concerned
with itself

sweating in the sun
that melted
the wings’ wax

unsignificantly
off the coast
there was

a splash quite unnoticed
this was
Icarus drowning

“Nature” Is What We See

I leant upon a coppice gate,
When Frost was spectre-gray,
And Winter’s dregs made desolate
The weakening eye of day.
The tangled bine-stems scored the sky
Like strings of broken lyres,
And all mankind that haunted nigh
Had sought their household fires.

The land’s sharp features seemed to me
The Century’s corpse outleant,
Its crypt the cloudy canopy,
The wind its death-lament.
The ancient pulse of germ and birth
Was shrunken hard and dry,
And every spirit upon earth
Seemed fervorless as I.

At once a voice arose among
The bleak twigs overhead,
In a full-hearted evensong
Of joy illimited.
An aged thrush, frail, gaunt and small,
With blast-beruffled plume,
Had chosen thus to fling his soul
Upon the growing gloom.

So little cause for carolings
Of such ecstatic sound
Was written on terrestrial things
Afar or nigh around,
That I could think there trembled through
His happy good-night air
Some blessed Hope, whereof he knew,
And I was unaware.

Has flowered at last upon one happy branch?
Why is thy dwelling in the pathless wood
Far from the deeds thy glorious youth demands,
Haunt of the anchorites and earth’s wilder broods,
Where only with thy witness self thou roamst
In Nature’s green unhuman loneliness
Surrounded by enormous silences
And the blind murmur of primaeval calms?”
And Satyavan replied to Savitri:
“In days when yet his sight looked clear on life,
King Dyumatsena once, the Shalwa, reigned
Through all the tract which from behind these tops
Passing its days of emerald delight
In trusting converse with the traveller winds
Turns, looking back towards the southern heavens,
And leans its flank upon the musing hills.
But equal Fate removed her covering hand.
A living night enclosed the strong man’s paths,
Heaven’s brilliant gods recalled their careless gifts,
Took from blank eyes their glad and helping ray
And led the uncertain goddess from his side.
Outcast from empire of the outer light,
Lost to the comradeship of seeing men,
He sojourns in two solitudes, within
And in the solemn rustle of the woods.
Son of that king, I, Satyavan, have lived
Contented, for not yet of thee aware,
In my high-peopled loneliness of spirit
And this huge vital murmur kin to me,
Nursed by the vastness, pupil of solitude.
Great Nature came to her recovered child;
I reigned in a kingdom of a nobler kind
Than men can build upon dull Matter’s soil;
I met the frankness of the primal earth,
I enjoyed the intimacy of infant God.
In the great tapestried chambers of her state,

When I see birches bend to left and right
Across the lines of straighter darker trees,
I like to think some boy’s been swinging them.
But swinging doesn’t bend them down to stay.
Ice-storms do that. Often you must have seen them
Loaded with ice a sunny winter morning
After a rain. They click upon themselves
As the breeze rises, and turn many-coloured
As the stir cracks and crazes their enamel.
Soon the sun’s warmth makes them shed crystal shells
Shattering and avalanching on the snow-crust
Such heaps of broken glass to sweep away
You’d think the inner dome of heaven had fallen.
They are dragged to the withered bracken by the load,
And they seem not to break; though once they are bowed
So low for long, they never right themselves:
You may see their trunks arching in the woods
Years afterwards, trailing their leaves on the ground,
Like girls on hands and knees that throw their hair
Before them over their heads to dry in the sun.
But I was going to say when Truth broke in
With all her matter-of-fact about the ice-storm,
I should prefer to have some boy bend them
As he went out and in to fetch the cows-
Some boy too far from town to learn baseball,
Whose only play was what he found himself,
Summer or winter, and could play alone.
One by one he subdued his father’s trees
By riding them down over and over again
Until he took the stiffness out of them,
And not one but hung limp, not one was left
For him to conquer. He learned all there was
To learn about not launching out too soon
And so not carrying the tree away
Clear to the ground. He always kept his poise
To the top branches, climbing carefully
With the same pains you use to fill a cup
Up to the brim, and even above the brim.
Then he flung outward, feet first, with a swish,
Kicking his way down through the air to the ground.
So was I once myself a swinger of birches.
And so I dream of going back to be.
It’s when I’m weary of considerations,
And life is too much like a pathless wood
Where your face burns and tickles with the cobwebs
Broken across it, and one eye is weeping
From a twig’s having lashed across it open.
I’d like to get away from earth awhile
And then come back to it and begin over.
May no fate willfully misunderstand me
And half grant what I wish and snatch me away
Not to return. Earth’s the right place for love:
I don’t know where it’s likely to go better.
I’d like to go by climbing a birch tree
And climb black branches up a snow-white trunk
Toward heaven, till the tree could bear no more,
But dipped its top and set me down again.
That would be good both going and coming back.
One could do worse than be a swinger of birches.