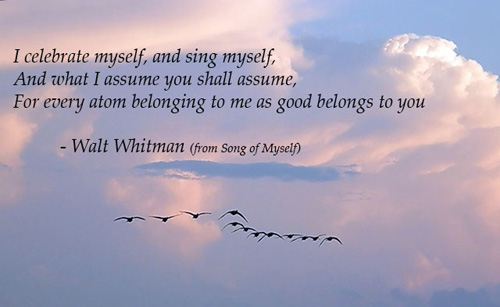 Come, said my soul,
Such verses for my Body let us write, (for we are one,)
That should I after return,
Or, long, long hence, in other spheres,
There to some group of mates the chants resuming,
(Tallying Earth’s soil, trees, winds, tumultuous waves,)
Ever with pleas’d smile I may keep on,
Ever and ever yet the verses owning–as, first, I here and now
Signing for Soul and Body, set to them my name,

How they are provided for upon the earth, (appearing at intervals,)
How dear and dreadful they are to the earth,
How they inure to themselves as much as to any -what a paradox
appears their age,
How people respond to them, yet know them not,
How there is something relentless in their fate all times,
How all times mischoose the objects of their adulation and reward,
And how the same inexorable price must still be paid for the same
great purchase.

Lo, the unbounded sea,
On its breast a ship starting, spreading all sails, carrying even
her moonsails.
The pennant is flying aloft as she speeds she speeds so stately-
below emulous waves press forward,
They surround the ship with shining curving motions and foam.

Grand Is the Seen

Grand is the seen, the light, to me–grand are the sky and stars,
Grand is the earth, and grand are lasting time and space,
And grand their laws, so multiform, puzzling, evolutionary;
But grander far the unseen soul of me, comprehending, endowing all those,
Lighting the light, the sky and stars, delving the earth, sailing the sea,
(What were all those, indeed, without thee, unseen soul? of what amount without thee?)
More evolutionary, vast, puzzling, O my soul!
More multiform far–more lasting thou than they.

I hear America singing, the varied carols I hear,
Those of mechanics, each one singing his as it should be blithe and strong,
The carpenter singing his as he measures his plank or beam,
The mason singing his as he makes ready for work, or leaves off work,
The boatman singing what belongs to him in his boat, the deckhand singing on the steamboat deck,
The shoemaker singing as he sits on his bench, the hatter singing as he stands,
The wood-cutter’s song, the ploughboy’s on his way in the morning, or at noon intermission or at sundown,
The delicious singing of the mother, or of the young wife at work, or of the girl sewing or washing,
Each singing what belongs to him or her and to none else,
The day what belongs to the day–at night the party of young fellows, robust, friendly,
Singing with open mouths their strong melodious songs.

Sometimes with One I Love

Sometimes with one I love I fill myself with rage for fear I effuse unreturn’d love,
But now I think there is no unreturn’d love, the pay is certain one way or another,
(I loved a certain person ardently and my love was not return’d,
Yet out of that I have written these songs).

Me imperturbe, standing at ease in Nature,
Master of all or mistress of all, aplomb in the midst of irrational things,
Imbued as they, passive, receptive, silent as they,
Finding my occupation, poverty, notoriety, foibles, crimes, less
important than I thought,
Me toward the Mexican sea, or in the Mannahatta or the Tennessee,
or far north or inland,
A river man, or a man of the woods or of any farm-life of these
States or of the coast, or the lakes or Kanada,
Me wherever my life is lived, O to be self-balanced for contingencies,
To confront night, storms, hunger, ridicule, accidents, rebuffs, as
the trees and animals do.

When I Heard the Learn’d Astronomer

When I heard the learn’d astronomer,
When the proofs, the figures, were ranged in columns before me,
When I was shown the charts and diagrams, to add, divide, and measure them,
When I sitting heard the astronomer where he lectured with much applause in the lecture-room,
How soon unaccountable I became tired and sick,
Till rising and gliding out I wander’d off by myself,
In the mystical moist night-air, and from time to time,
Look’d up in perfect silence at the stars.

I Dream’d in a Dream

I dream’d in a dream
I saw a city invincible to the attacks of the
whole of the rest of the earth,
I dream’d that was the new city of Friends,
Nothing was greater there
than the quality of robust love, it led the rest,
It was seen every hour in the actions of the men of that city,
And in all their looks and words.