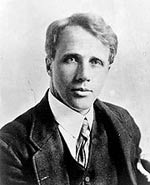 Robert Lee Frost (March 26, 1874 – January 29, 1963) was an American poet. He is highly regarded for his realistic depictions of rural life and his command of American colloquial speech. His work frequently employed settings from rural life in New England in the early twentieth century, using them to examine complex social and philosophical themes. One of the most popular and critically respected American poets of his generation, Frost was honored frequently during his lifetime, receiving four Pulitzer Prizes for Poetry. 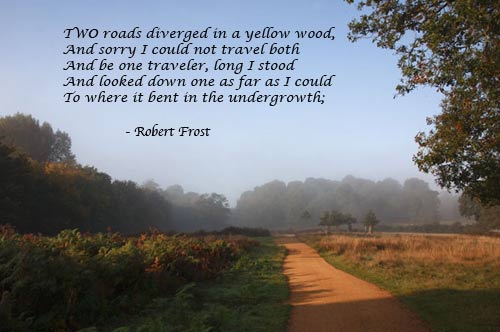 Now close the windows and hush all the fields:
If the trees must, let them silently toss;
No bird is singing now, and if there is,
Be it my loss.

A Patch of Old Snow

There’s a patch of old snow in a corner
That I should have guessed
Was a blow-away paper the rain
Had brought to rest.

It is speckled with grime as if
Small print overspread it,
The news of a day I’ve forgotten–
If I ever read it.

A Time to Talk

When a friend calls to me from the road
And slows his horse to a meaning walk,
I don’t stand still and look around
On all the hills I haven’t hoed,
And shout from where I am, ‘What is it?’
No, not as there is a time talk.
I thrust my hoe in the mellow ground,
Blade-end up and five feet tall,
And plod: I go up to the stone wall
For a friendly visit.

Some say the world will end in fire,
Some say in ice.
From what I’ve tasted of desire
I hold with those who favour fire.
But if it had to perish twice,
I think I know enough of hate
To say that for destruction ice
Is also great
And would suffice.

Has given my heart
A change of mood
And saved some part
Of a day I had rued.

Stopping by Woods on a Snowy Evening

Whose woods these are I think I know.
His house is in the village, though;
He will not see me stopping here
To watch his woods fill up with snow.

My little horse must think it queer
To stop without a farmhouse near
Between the woods and frozen lake
The darkest evening of the year.

He gives his harness bells a shake
To ask if there is some mistake.
The only other sound’s the sweep
Of easy wind and downy flake.

A Prayer in Spring

Oh, give us pleasure in the flowers to-day;
And give us not to think so far away
As the uncertain harvest; keep us here
All simply in the springing of the year.

Oh, give us pleasure in the orchard white,
Like nothing else by day, like ghosts by night;
And make us happy in the happy bees,
The swarm dilating round the perfect trees.

And make us happy in the darting bird
That suddenly above the bees is heard,
The meteor that thrusts in with needle bill,
And off a blossom in mid air stands still.

For this is love and nothing else is love,
The which it is reserved for God above
To sanctify to what far ends He will,
But which it only needs that we fulfil.

He halted in the wind, and — what was that
Far in the maples, pale, but not a ghost?
He stood there bringing March against his thought,
And yet too ready to believe the most.

“Oh, that’s the Paradise-in-bloom,” I said;
And truly it was fair enough for flowers
had we but in us to assume in march
Such white luxuriance of May for ours.

We stood a moment so in a strange world,
Myself as one his own pretense deceives;
And then I said the truth (and we moved on).
A young beech clinging to its last year’s leaves.

I had withdrawn in forest, and my song
Was swallowed up in leaves that blew alway;
And to the forest edge you came one day
(This was my dream) and looked and pondered long,
But did not enter, though the wish was strong:
You shook your pensive head as who should say,
‘I dare not—too far in his footsteps stray—
He must seek me would he undo the wrong.

Not far, but near, I stood and saw it all
Behind low boughs the trees let down outside;
And the sweet pang it cost me not to call
And tell you that I saw does still abide.
But ’tis not true that thus I dwelt aloof,
For the wood wakes, and you are here for proof.

Nothing Gold Can Stay

Nature’s first green is gold,
Her hardest hue to hold.
Her early leaf’s a flower;
But only so an hour.
Then leaf subsides to leaf.
So Eden sank to grief,
So dawn goes down to day.
Nothing gold can stay.

A plow, they say, to plow the snow.
They cannot mean to plant it, no–
Unless in bitterness to mock
At having cultivated rock.

The rose is a rose,
And was always a rose.
But the theory now goes
That the apple’s a rose,
And the pear is, and so’s
The plum, I suppose.
The dear only know
What will next prove a rose.
You, of course, are a rose–
But were always a rose.

Fireflies in the Garden

Here come real stars to fill the upper skies,
And here on earth come emulating flies,
That though they never equal stars in size,
(And they were never really stars at heart)
Achieve at times a very star-like start.
Only, of course, they can’t sustain the part.

The heart can think of no devotion
Greater than being shore to the ocean–
Holding the curve of one position,
Counting an endless repetition.

The rain to the wind said,
‘You push and I’ll pelt.’
They so smote the garden bed
That the flowers actually knelt,
And lay lodged–though not dead.
I know how the flowers felt.

I have wished a bird would fly away,
And not sing by my house all day;

Have clapped my hands at him from the door
When it seemed as if I could bear no more.

The fault must partly have been in me.
The bird was not to blame for his key.

And of course there must be something wrong
In wanting to silence any song.

No ship of all that under sail or steam
Have gathered people to us more and more
But Pilgrim-manned the Mayflower in a dream
Has been her anxious convoy in to shore.

Was there even a cause too lost,
Ever a cause that was lost too long,
Or that showed with the lapse of time to vain
For the generous tears of youth and song?

Poem top Extract from ‘The Road Not Taken’

Two roads diverged in a yellow wood,
And sorry I could not travel both
And be one traveler, long I stood
And looked down one as far as I could
To where it bent in the undergrowth;

Then took the other, as just as fair,
And having perhaps the better claim
Because it was grassy and wanted wear,
Though as for that the passing there
Had worn them really about the same,

And both that morning equally lay
In leaves no step had trodden black.
Oh, I marked the first for another day!
Yet knowing how way leads on to way
I doubted if I should ever come back.

I shall be telling this with a sigh
Somewhere ages and ages hence:
Two roads diverged in a wood, and I,
I took the one less traveled by,
And that has made all the difference.